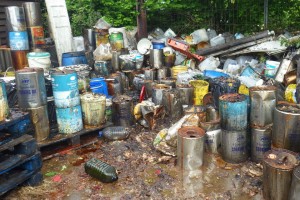 The operator of an illegal waste cooking oil storage and processing plant located in the Dorset countryside has received a given a four month prison sentence suspended for eighteen months, ordered to carry out two hundred hours unpaid community work and made the subject of a Criminal Behaviour Order.  He was also ordered to pay £20,000 costs.

Waste oil was being kept at the site in an ‘ad hoc and haphazard fashion’. This resulted in neighbouring properties and a stream being polluted. When two of his neighbours complained the defendant threatened them with violence. Environment Agency staff estimated that approximately 60,000 litres of mixed oils and food products were being stored at the site and some of the materials were contaminated with plastics, wood and human wastes.

Total costs for clean up of the site may exceed £50,000 for which West Dorset District Council may launch civil proceedings against the operator to recover this money. The Environment Agency had also incurred £29,500 in investigation and legal costs.